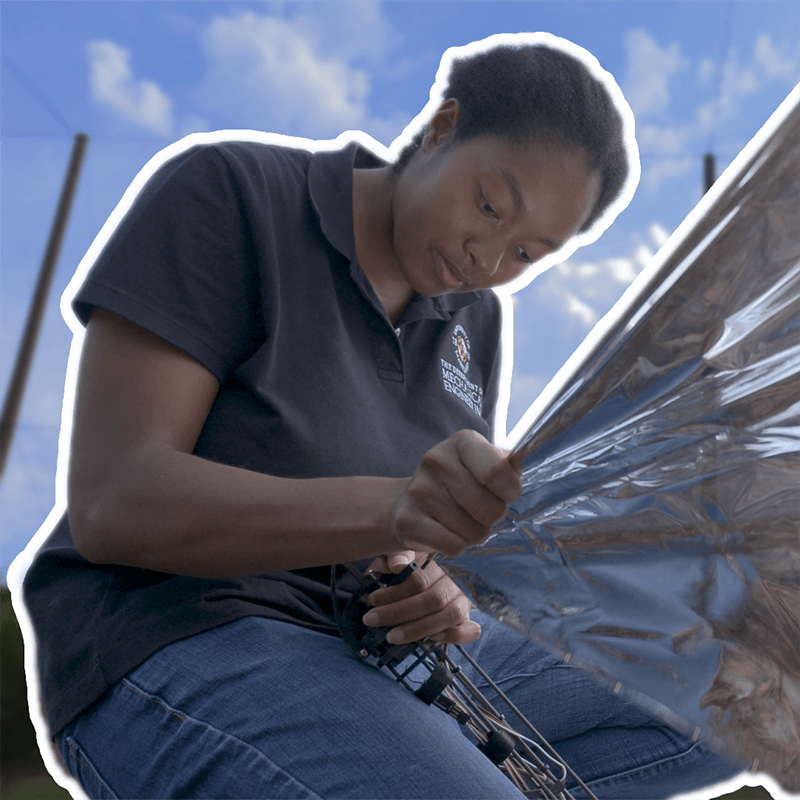 There are so many kids in disadvantaged communities who have never even dreamed of becoming an engineer.

Inspired by the beauty and flying ability of birds, Leonardo da Vinci strived centuries ago to create a human-powered flapping-wing flying machine. But his designs, which da Vinci explored in his Codex on the Flight of Birds, were never developed in any practical way. Even today, mimicking bird flight still presents challenges due to the physiological complexity of a bird’s flapping wings.

For years, researchers at the University of Maryland’s A. James Clark School of Engineering have been moving ever closer to imitating bird flight with Robo Raven, the first bird-inspired unmanned aerial vehicle (UAV) that has successfully flown with independent wing control.

Lena Johnson (’14, M.S. ’16), who is pursuing her Ph.D. in mechanical engineering, is working on the current iteration of the aerodynamic robotic bird, known as Robo Raven V. The doctoral student believes Robo Raven gives her a platform to make the impossible possible by designing a UAV with greater controllability and likelihood of sustained wing-powered flight than other similar vehicles.

Johnson hopes that this version’s expanded maneuverability, developed takeoff capability, and added propellers for thrust production will aid the UAV in areas she’s researching, such as ecological monitoring and disaster response.

Johnson also wants to share her work on Robo Raven in local schools and libraries in hopes of inspiring other young students that they, too, can make the impossible possible through engineering.

“There are so many kids in disadvantaged communities who have never even dreamed of becoming an engineer. It takes just one role model or exposure through an after-school robotics program to turn on that light of possibility,” says Johnson.

Robo Raven was pioneered in 2008 by Clark School Professors S.K. Gupta and Hugh Bruck. Gupta and Bruck wanted to develop a robotic bird that was quick and multifaceted for many applications, both civilian and military.

Learn more about robotics at the Clark School! Visit the Institute for Systems Research and the Maryland Robotics Center websites.